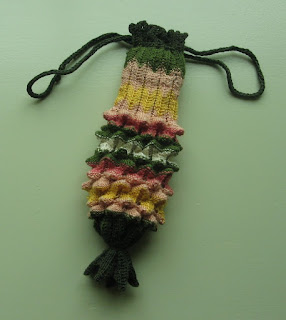 This delightful little purse is finished, and I think that it is quite one of the prettiest things I have ever made! The pattern, Porcupine Knitting for a Purse, is from A Winter Gift for Ladies Being Instructions in Knitting, Netting and Crotchet (sic) Work. Containing the Newest and Most Fashionable Patterns. From the Latest London Edition Revised and Enlarged by An American Lady. Philadelphia: G.B. Zieber & Co. 1848.This book is available from
http://www.antiquepatternlibrary.org

I modeled the colours on the same purse in the collection of the Victoria and Albert Museum  http://collections.vam.ac.uk/item/O75481/purse-unknown/)

I have already written in this blog about the construction details of this purse and the larger version I made in the following two links:

There were many ends left at the end but as I lined the purse with imitation pale green silk, I tied them off and covered them up. 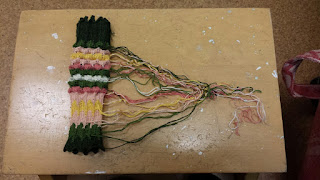 As mentioned in my other posts, I did not add beads. The finished purse measures just over 7” long, including the “leaves” at the bottom, and 2” wide at the broadest part of the points’ section. 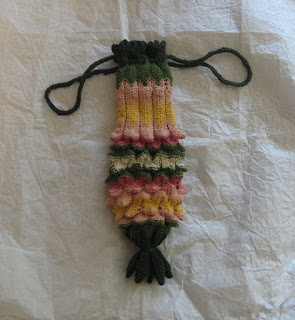 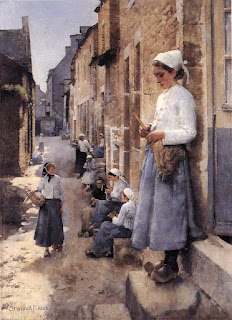 Posted by One More Stitch at 10:19 No comments: 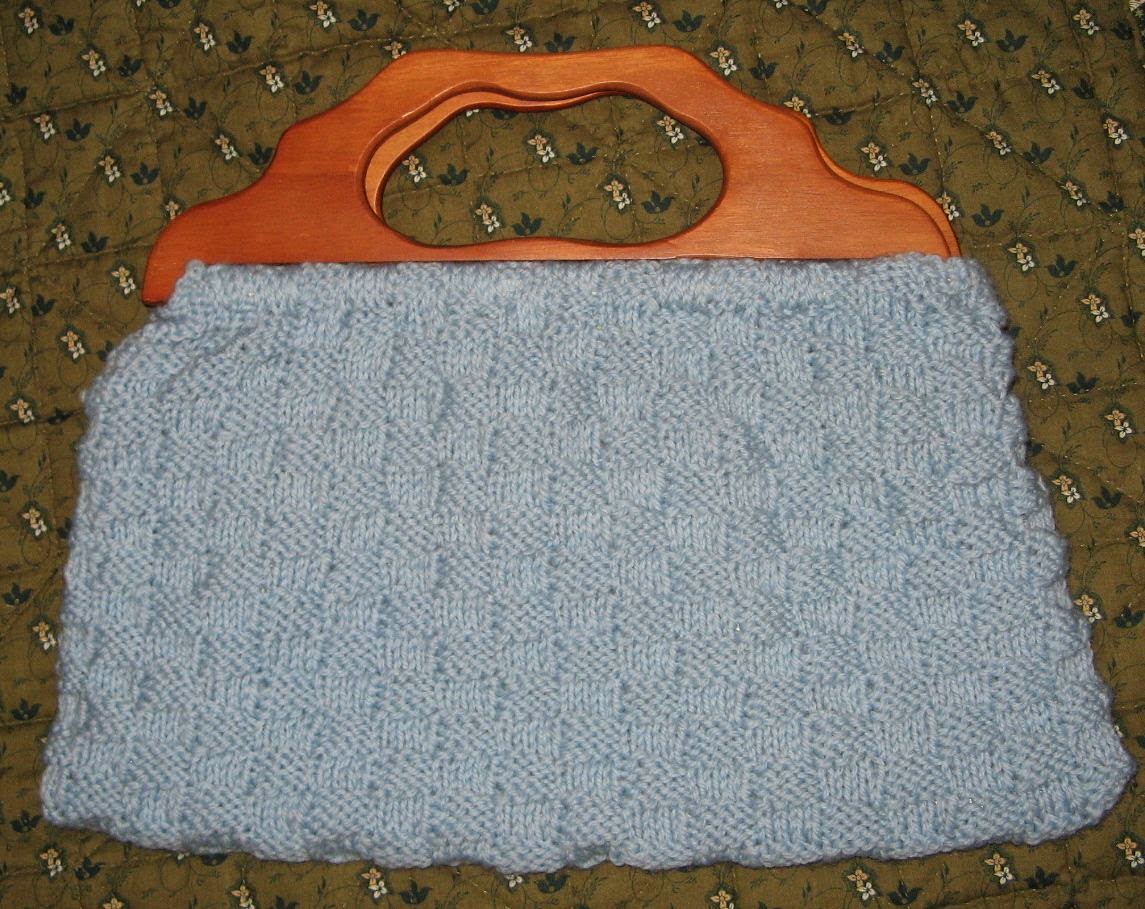 Throughout 2013, I ran a series on this blog of images of actresses from the 1930s and 1940s who were photographed knitting or were truly knitters. I often drew attention to the knitting bags in some of the photographs, from simple cloth ones with wooden handles to special ones for knitting for the troops during World War Two.


The only knitted knitting bag I found in photographs was one being used by a young Shirley Temple, pictured here possibly in the late 1930s:


Later photographs of her showed her knitting but not with that bag:


After some research, I found a pattern from 1934 for a “Sport Coat – Alpine Hat and Knitting Bag, 1. Style No.222” for "Yarncraft" in the American Magazine, November, 1934. This one resembles Shirley Temple’s knitted bag. 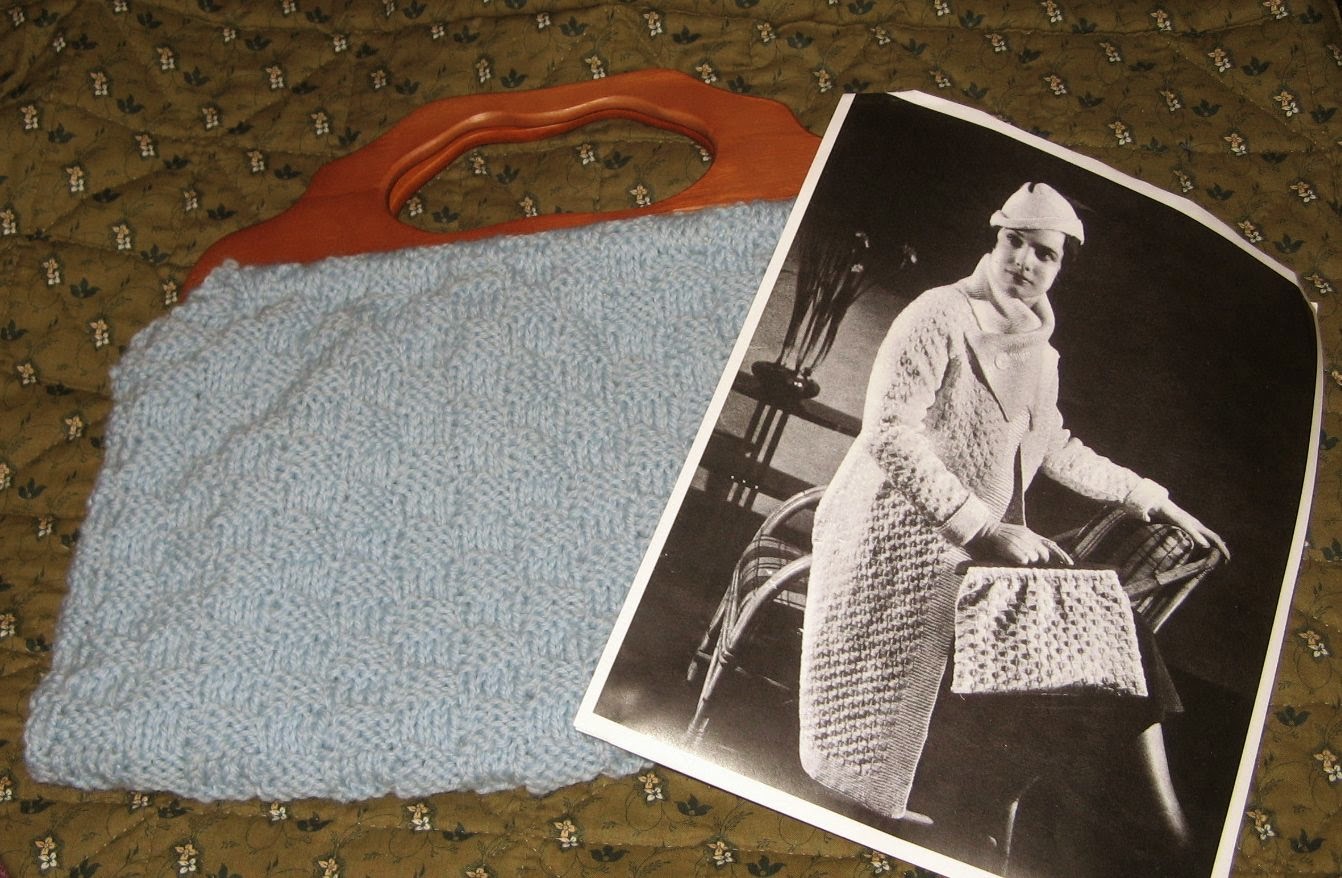 I haven’t quite figured out how the knitting bag fits into the coat and hat ensemble unless the three were aimed at women like me who never leave the house without knitting. My knitting goes out to work and visiting with me but I also carry it as a reverse jinx in the hopes that my transport won’t break down or I will be stuck somewhere with nothing to do. At any rate, the bag from 1934 is a close fit to the one with the young Shirley Temple.


The bag is supposed to be knit in “Germantown Zephyr.” I don't know the exact weight of Germantown from the 1930s but I do know what one kind was like in the 1980s, namely close to  Brown Sheep’s Nature Spun Worsted. I chose that yarn in Bit of Blue.  Considering that a coat was also to be knit in the same yarn, it must have been fairly substantial. “bone needles 7 mm” were suggested but based on my calculations of the finished bag’s size, I used 6 mm/US 10. The pattern was a very simple repetitive one and is knit in a rectangle, measuring 19” long. It should be lined with “Sateen.” My bag is lined with a mint green sateen. 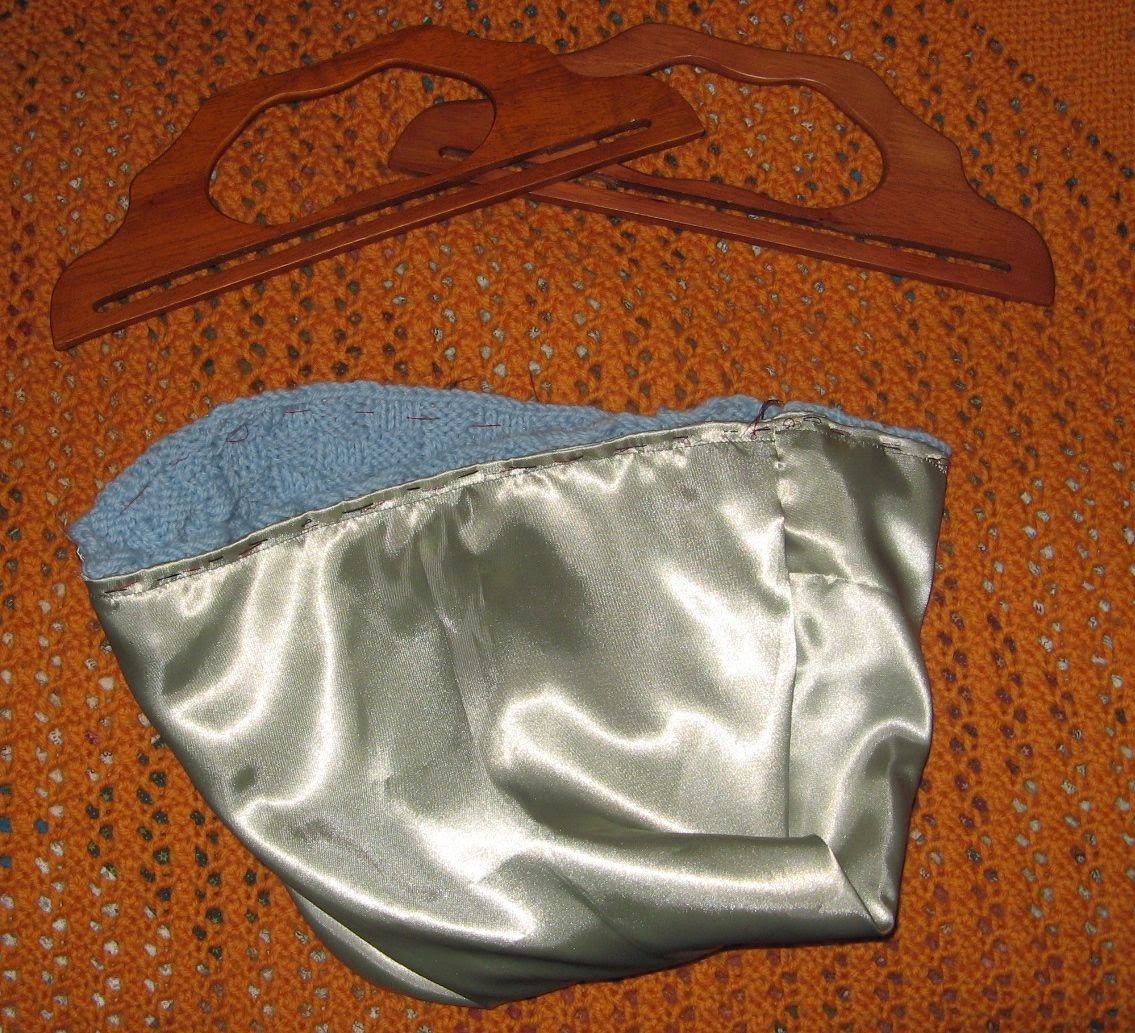 It is not, however, as large as the one in the photograph but that may be because I rolled over and hemmed too much knitted fabric into the slots of the handles.

Posted by One More Stitch at 22:00 No comments: 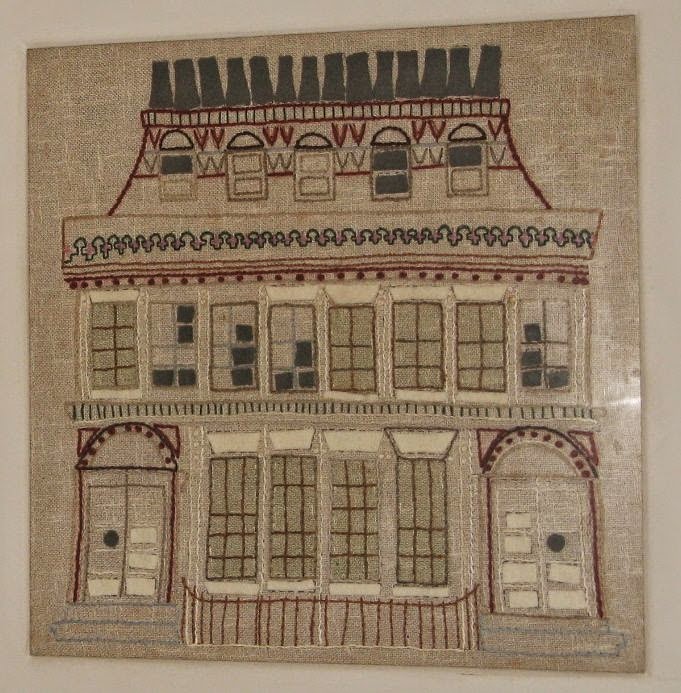 I am moving house. Downsizing, clearing out, packing up. As a result, my projects are suffering.With all the best intentions, I packed  and am still packing the knitting, quilting, needlework, rug hooking in what seemed and seems to be a systematic way. Much of it is in temporary but retrievable storage. Somewhere in the process, however, two very important collections went missing, namely my complete set of Weldon’s in facsimile editions and the small group of photocopied patterns from them that are my working/marked up ones for current projects. The projects, themselves, are safe in a container next to me as I type but not the patterns. As I am in another Year of Completion and these Weldon’s projects are small but time-consuming, the situation is rather frustrating.

Luckily, I have more projects, of course, in progress and planned so I do have some things to feature on this blog in the coming months. The non-knitting one pictured here is one I did decades ago. It is a mixture of stitchery and glued-on materials on linen. It was a kit from the much missed The Needlewoman in Regent Street, London. 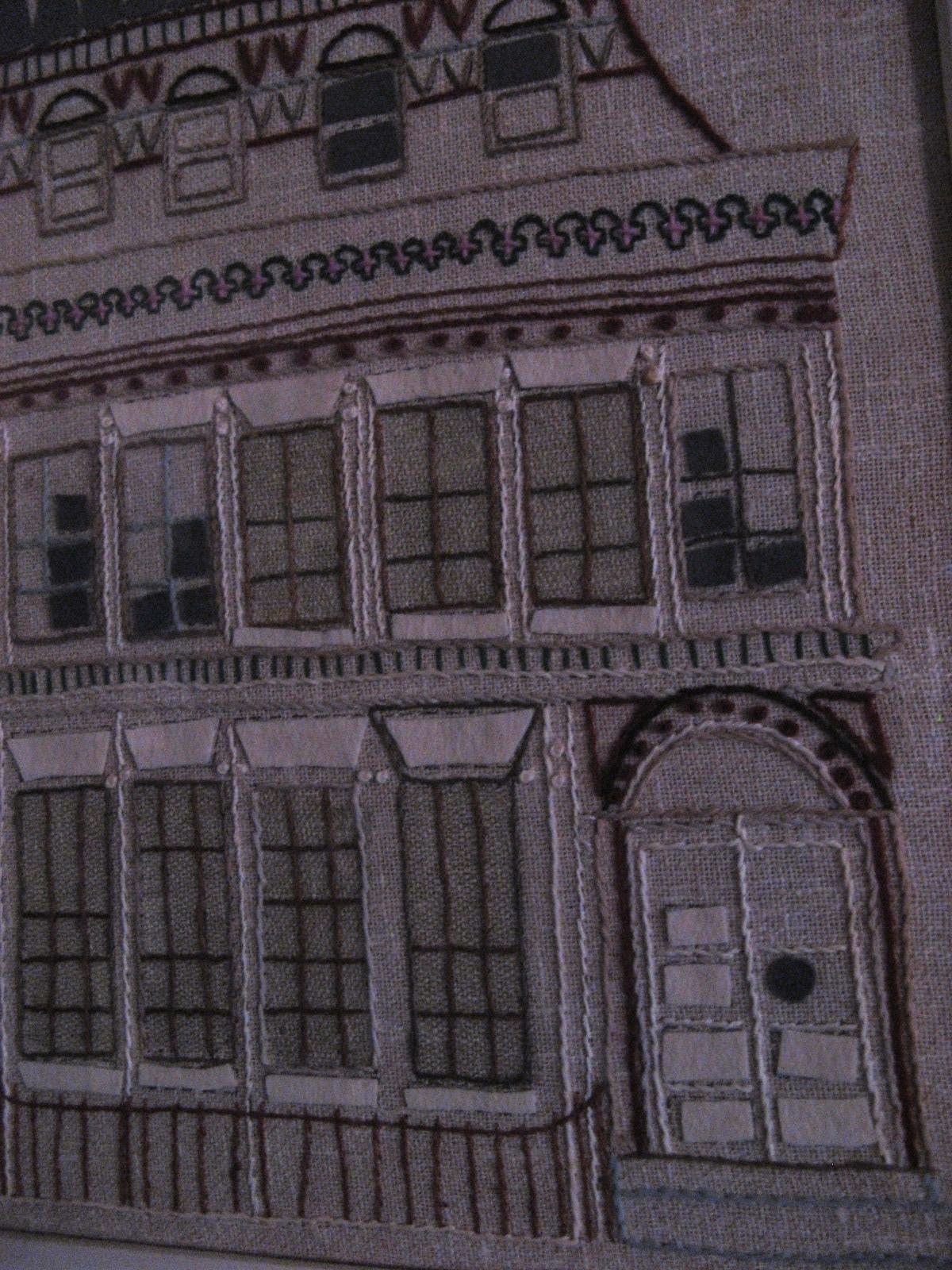 The piece is large and framed, under glass, but was difficult to photograph, especially close-up, hence the dark image.

Posted by One More Stitch at 18:59 No comments: 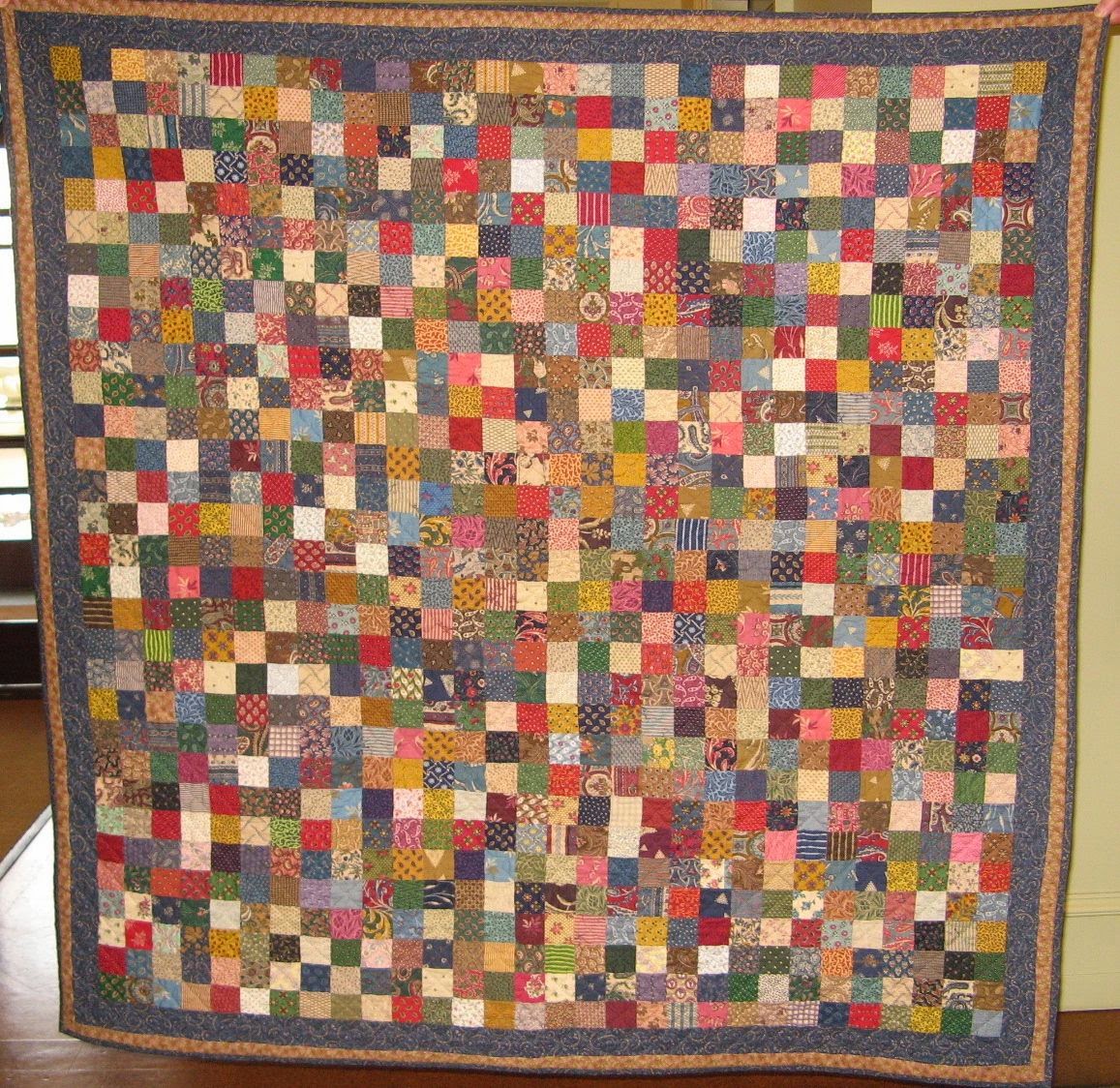 This is the last quilt that bears any relation to a reproduction one that I will be featuring on this blog for some time. I have two almost identical mid-19th century ones in progress, one at the top only stage and the other simply needing its edges sewn down. They are both on hold, however, as I make a few modern ones due to the sudden outbreak of weddings and babies in my life.

I love all my quilts equally but this one does hold a special place in my heart. It is composed of sample, many of them small print, 100% cotton squares from the designer Judie Rothermel and her Schoolhouse Quilt Shoppe, featuring both 19th century reproductions and “inspired by” prints. 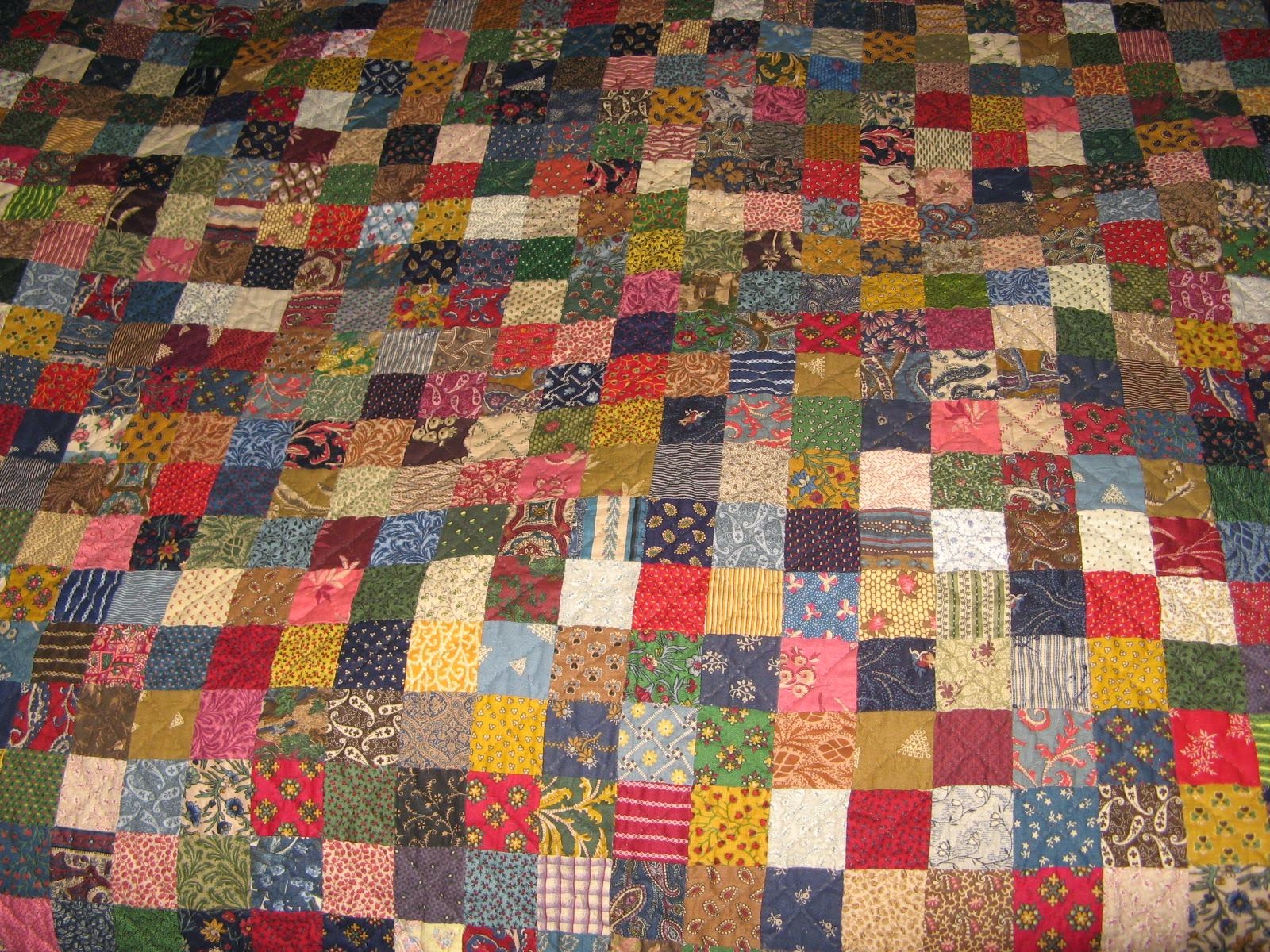 As with the Sarah Johnson/Copp Family quilt*, these squares were out on the floor for a few weeks so I could not only study them for colour and design but also pass them repeatedly, and subliminally take in the layout and make changes. I never tire of closely examining them in the finished quilt, and I love Judie Rothermel’s dark navy and gold borders and backing, too. 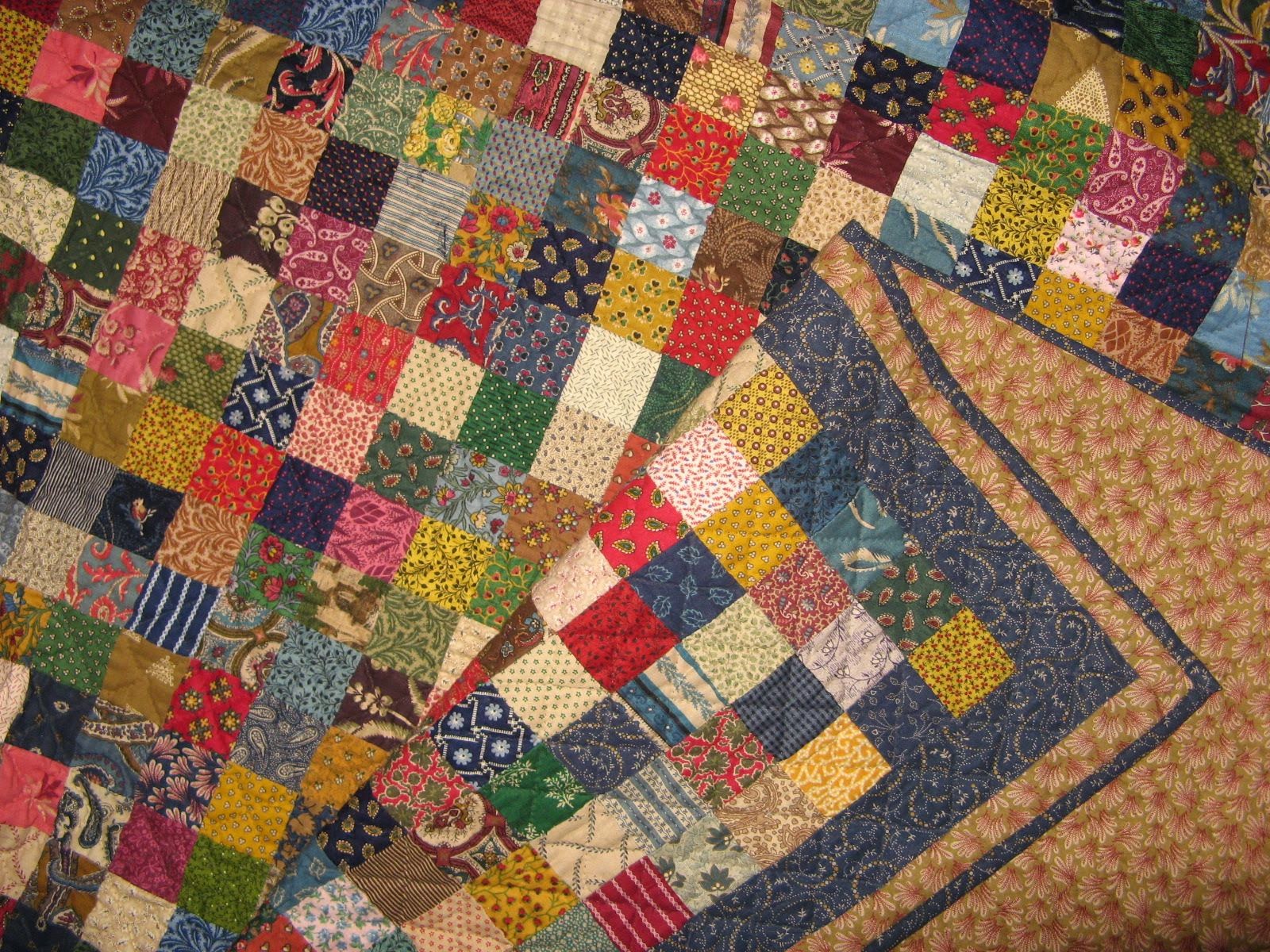 This quilt measures  roughly 53” square, and each interior piece is a 1 ½”square. It was entirely hand-pieced and hand-quilted, and is filled with Warm & Natural cotton batting/wadding. 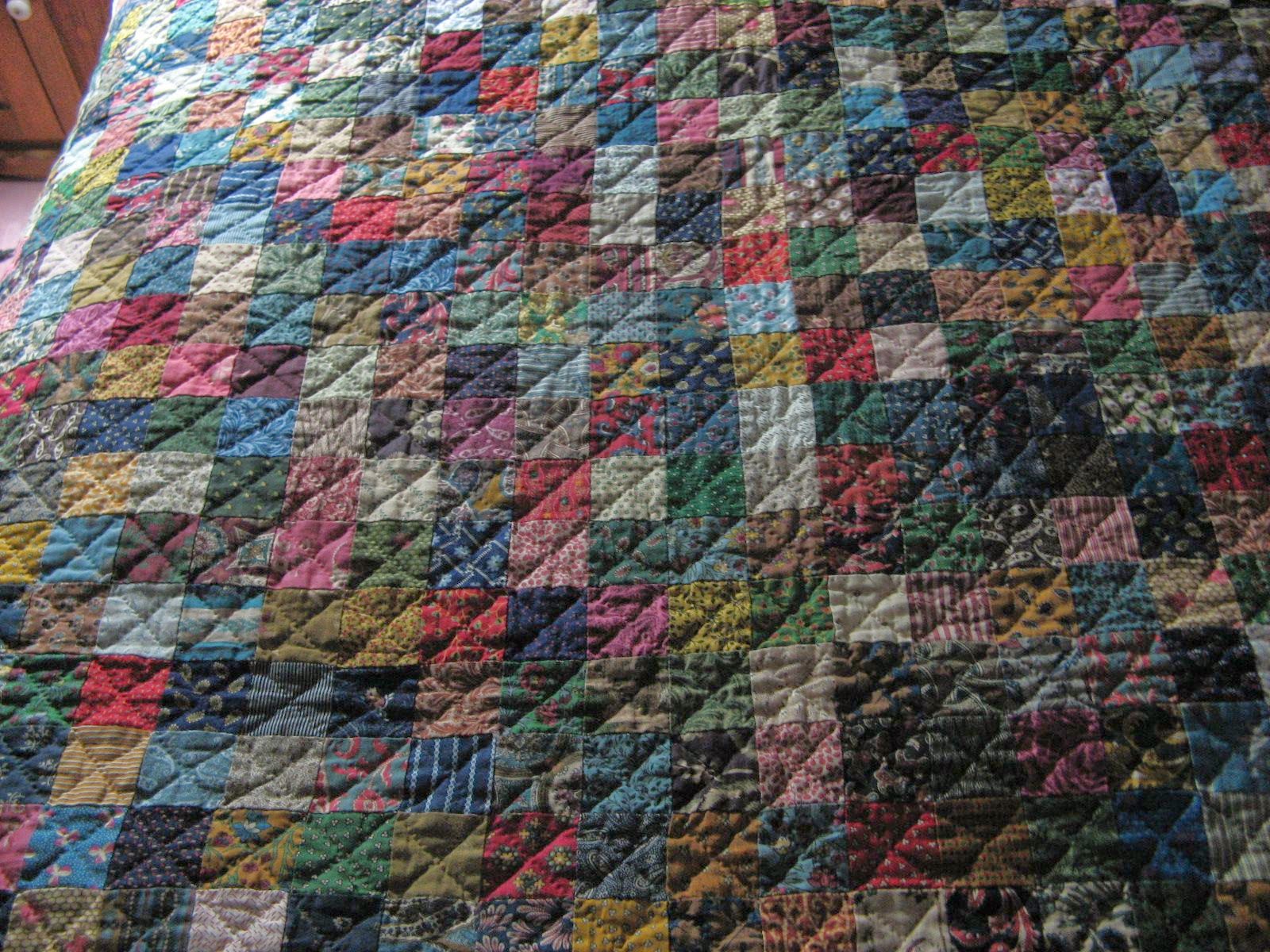 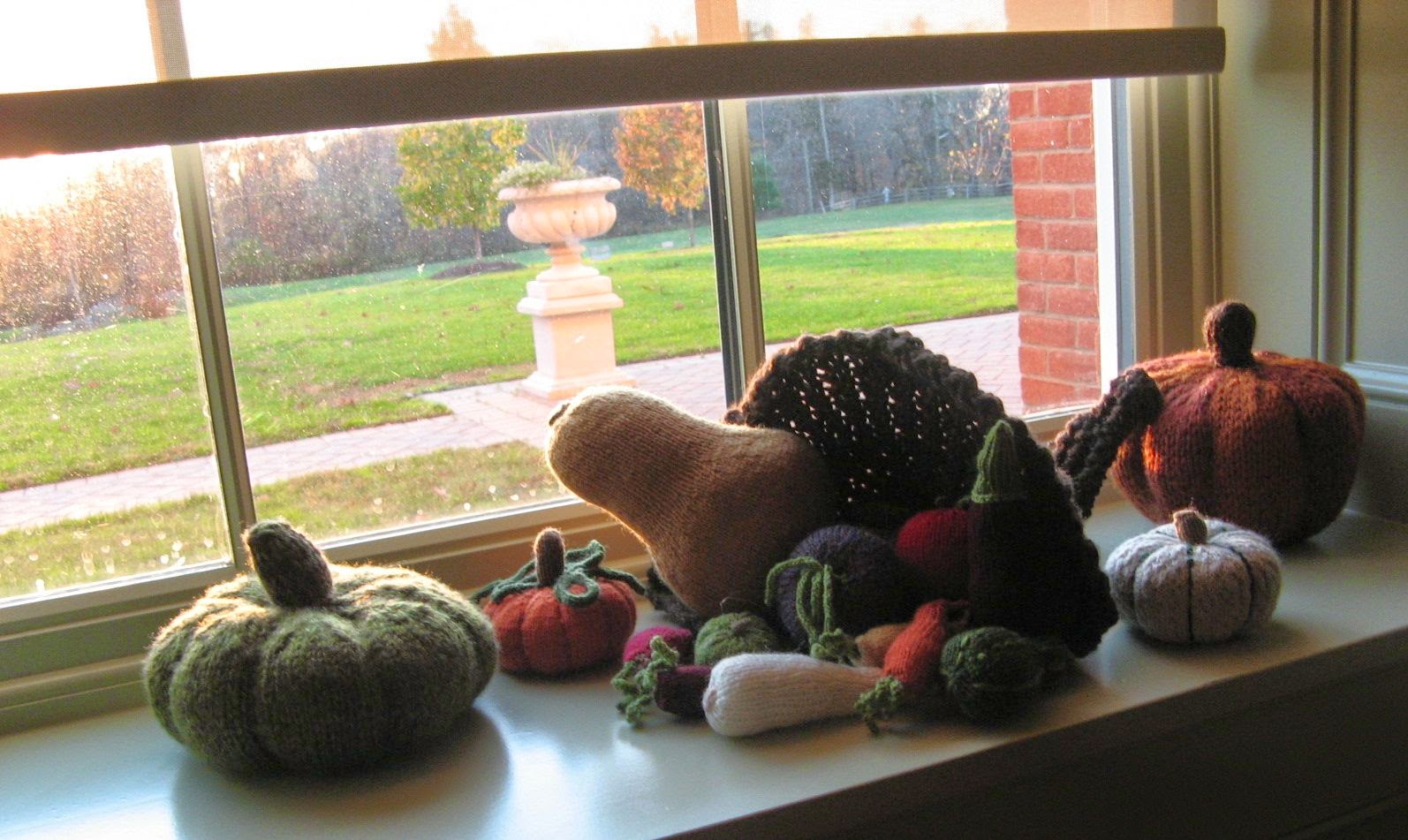 This collection of knitted harvest vegetables and a cornucopia embellishes a table at work. The tiny pumpkins are borrowed from the Halloween tree, and the rest are from various patterns, all scattered across my Raverly projects' page. They were all fun to knit, and contributed to a bit of stash busting. 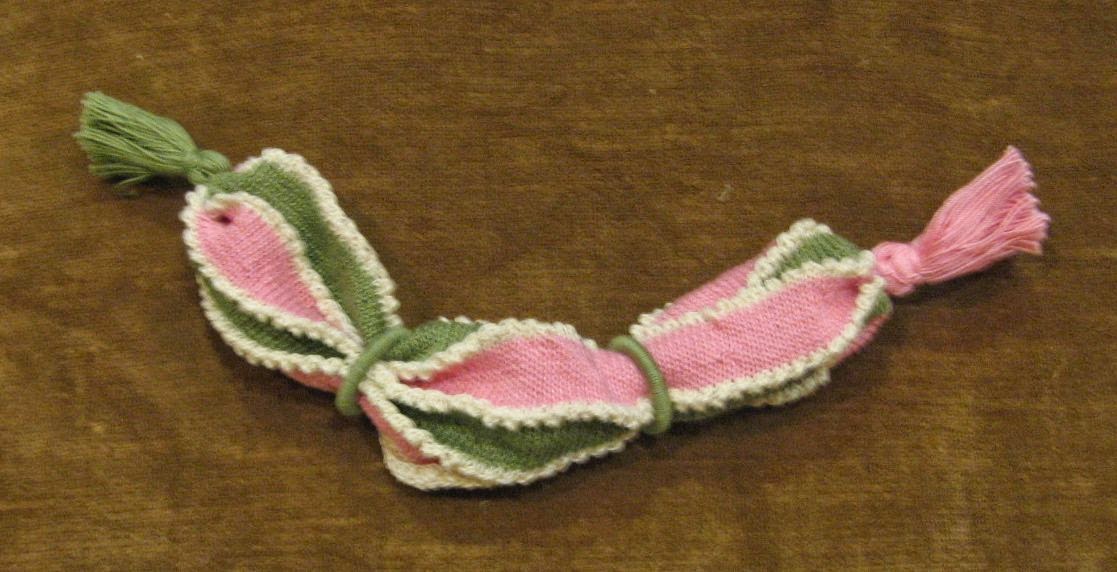 This pattern comes from the second of Wicked Woolen’s Two Victorian Purses.* It is a “modernised” version of A Very Pretty Turkish Purse.**  Knit on larger needles and with fewer stitches, this newer purse is still close in size to the other one I made from the original pattern. Of course, not having 19th century materials to knit with, I have no idea of the exact size of the purse knit in the 1840s.

This version was knit on 2 mm/US O needles with DMC Cébélia 10 cotton in green, pink and white. As with the last purse, the rings are too large so I will have to look out for smaller ones to ensure a more snug fit.

Posted by One More Stitch at 08:38 No comments: