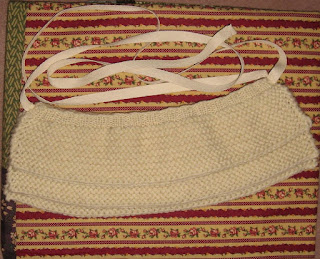 This was a quick and easy project. The pattern, which is only three sentences long, is from The New Guide to Knitting and Crochet by Marie Jane Cooper, published by J.S. Cooper, Foreign and British Depot of Berlin Patterns and Materials for Ladies’ Fancy Works, Royal Marine Library, Hastings and Parry, Blenkarn & Co., London, 1847.

The top of each piece is ribbed with the smaller sized needles, and the rest of the piece, on the larger sized needles, should be “knit” which I interpreted as knitting every row resulting in a garter stitched material. The three separate pieces, with respectively increasingly numbers of rows, all measure 15” across and 3 ½”, 4 ½”, and 5 ½” long. To assemble, the pattern states to “join them altogether at the part which is ribbed, and put it on a string.”  I used cotton woven tape for the waist’s ties. 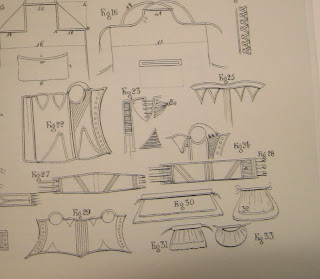 The skirts of dresses of this era were full, finely gathered all round the waist.* According to the The Workwoman’s Guide** of 1838, this style of bustle was not meant to make an unnatural curve at the rear of the body as in the latter part of the 19th century but to be “worn by those whose shape requires something to set off the skirt of the gown. They should not be too large, or they look indelicate, or in bad taste.” This “Plate 11,” from the pattern in The Workwoman’s Guide, illustrates cloth bustles (“Fig. 30, 32. “)

A similar bustle, dated 1833 and made of white cotton satin with linen tapes can be viewed here: