“Pine-apple” Purse from The Lady’s Stratagem 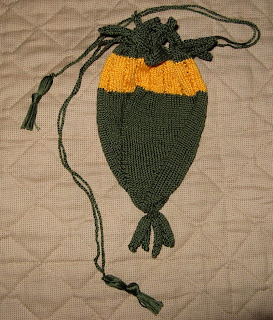 This book is a delight to read from cover to cover. There are sections on health, etiquette, beauty, cosmetics, servants, courtship, clothing, millinery, accessories, needlework and much, much more. It is highly defined within the period of time variously known as the “Extended Regency, American Federal Period, Fur Trade Era, Colonial Canada, Bourbon Restoration.”

Chapter XVII, The Art of Knitting, pages 431-458, does not have a great many patterns but does include some things I had not yet seen in publications from this era such as a Beret, Pantaloons, Waistcoats and Night Jackets, and a discussion of “Open-Work Knitting,” which, as a keen knitter of lace patterns from 1830’s-1840s, made me very happy. There are also instructions or patterns for knitting stockings, slippers, gloves, petticoats, mitts and purses.

The pattern for “A Purse knitted like a Pine-apple” appears on pages 445-446. As with other early knitting patterns, there is no recommended needle size or gauge. “Green” and “orange silk” are the suggested materials. There is no illustration of the purse but the final line of the pattern states that when “the purse is closed at the top with drawing-strings, it has altogether the air of a pine-apple” (page 446.)

The pattern is typically, of the era, intuitive. In addition, two different counts of the ultimate number of stitches needed for the top of the bag are given although only one of them is divisible by six and neither by eight, one or both of which is essential for the eyelet openings and the leaves. I increased to a number in between the two suggested numbers that gave me the correct division later on.

The bag begins with the five leaves at the bottom which “take the place of the tassel,” and are knit upside down, one at a time, narrowing the total numbers of stitches down to the very small number of the base of the star which is how the lower green part is knit. No directions were given for the leaves, only that they should resemble “…a little tab like the strap of a slipper.” Shoes were dainty in the 1820’s so these leaves are too. I did not make them very long, though, as they would have been flopping all over the place and the upper ones would have then hidden the small section of orange knitting. This part’s openwork contains a choice of a hole à jour (which I used) or à crochet; explanations of both techniques are given elsewhere in the chapter.

The “drawing strings” are a “flat braid au crochet…made by a kind of knitting, or rather a chain-stitch…(using) a hook, which is an iron instrument two or three inches long terminating in a curved point, and fitted into a wooden handle.” (page 539) I determined their length and the size of the tassels by one of the illustrations of a purse or reticule elsewhere in The Lady’s Stratagem and other period clothing prints. The first ones I made are in the photograph but they came out too long when I gathered the purse's top so they will have to be shortened.

Since silk is out of my price range, I substituted DMC Six Strand Embroidery Floss in Green 935 (16 skeins) and Orange 742 (3 skeins) and knit the bag on 2mm/0US double pointed needles at a gauge of 10 stitches to the inch. The leaves are just over 1 ¼” long each and the purse’s body measures 6” long in total and 6” across at the widest top part of the orange section.

The “flat braid” was badly crocheted (my talents lie elsewhere) on a 2mm/0US hook. I am going to line the lower green part of the purse, perhaps with “white taffety” as recommended later on this chapter (page 450.)

I plan to make more items from this book but I also want to try and track down the exact source of each pattern. The bibliography is helpful and I have also been pointed to the Manuel des Demoiselles ou Arts et Métiers…. whose edition from 1830 is available on Googlebooks and which contains directions for the “Bourses en ananas” on page 176.* My next task is to translate that section and compare it to the pattern above.

*My thanks to Alwen. 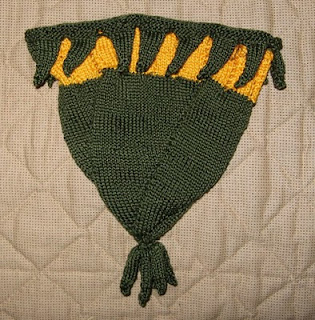 Fascinating source, that "Manuel". Page 192 begins a section including "ganse" which appears to mean a kind of twisted cord. I wonder whether there is any connection between that and the word "gansey" - could it be that two words collided, French "ganse" and Channel Islands dialect "Guernsey"?

Sounds like a very interesting book. I really like the unexpected whimsy of the pineapple purse, very well executed madam!

p.s. now I can't find "ganse" on p.192, but it occurs elsewhere in the book. The two "berret" forms and the man's cap look interesting too.
Luckily the hat drawing wasn't lost in the debacle of the folded illustration pages.